In this post I will be sharing one of the most profound and impactful lessons of my life.

But for you to really relate, I need you to participate.

So please go get a blank piece of paper and a pen.

Okay.  Draw as big a circle as you can on the page.

Now think about everything you are concerned about.  Everything: your aging mom, the near term milestone on that project, the risk of the company losing a key leader, the European financial crisis, etc.  Make small x’s inside the circle to represent each of those concerns.

You are now looking at your circle of concern.  Mark it as such.

Now draw a second, smaller, circle, inside the larger one, around those concerns that you believe you can do something about. 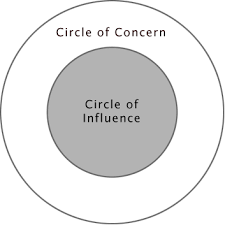 You are now looking at your circle of influence.  Mark it as such!

In reality it is more than disheartening.  It is distracting.  And that distraction has consequences.

When we focus on things that we really can’t do anything about, we are actually expending valuable time and energy that could have been used to work on those things that are inside your circle of influence, those concerns that you really could do something about.

What really ends up happening is your circle of influence shrinks.

Yep, I said that right; when we worry, stress out, and become fixated or paralyzed by the things that we are concerned about but can’t really do anything about, we miss the opportunity to influence one or more of those things inside the smaller influence circle.  Let’s say you’ve been stressin’ about Greece pulling out of the Eurozone and Spain defaulting on its debt and Italy’s next and geezus what’s going to happen to my 401K! … and you miss the opportunity to work on that project milestone.  It’s too late to recover.  You are going to have to report that you missed that milestone, and the deliverable target date is now at risk.

Not a good thing.

But there’s more to this exercise, and if you quit now, you will only have seen the downside.  There is considerable upside.  Trust me.

Let’s say we don’t get distracted by those concerns that we know we can’t do anything about.  Let’s say, instead of obsessing about Greece and Spain and Italy and your 401K you use that time and energy to set up some coaching from a trusted colleague on the near term project milestone.  As a result, she actually helps you quite a bit; you subsequently are in much better shape to report on that milestone.  And when you make that report, it is well-received and your skill and effort is recognized.

Odds are pretty good that your circle of influence just got larger.

You’re thinking you may have less of a concern for that project, or even no concern at all anymore, but how can I say your circle of influence got larger?

Because it’s at least possible that that flight risk leader took notice of the way you recovered that project, and wants to talk about how you did it, and how might you help him… and that previous “nothing you can do” concern just slid into your circle of influence.

That’s quite a stretch you say?  Okay, another possibility:  because you are not so much concerned about the project now, you can devote some time and energy to researching twice a week home nursing visits for your mom.  That concern just slid into your circle of influence…

Look, these are hypotheticals.  I’m trying to bring to life those x’s on a piece of paper; but I don’t have to try that hard, right?  You know ’em…

… and you know what this is all about.

Maybe you don’t need to be reminded, but I do —

That’s the impactful, easy-to-understand-but-difficult-to-sustain-in-real-life part of the lesson.

Here’s the profound part — The more I influence, the more I can influence.

Yes, I do worry about the Eurozone financial crisis.  Can’t really do anything about that particular concern.

4 thoughts on “X the Concerns”