The exhortation to think outside the box has become ubiquitous in business. [But] the advice is backwards. You cannot possibly think outside the box unless you understand the nature of the box that bounds your current thinking. You must come to know that nature deeply. You must have real insight into it. You must accept it, and embrace it at some level, before it will ever release you.

Remember the nine dot challenge?  Using four straight lines and without lifting your pencil off the paper, connect all nine dots.

On the off chance that you haven’t run into this before (or have forgot!) give it a go and see if you can solve it before we continue.

If you’re stuck, here’s a tip — your lines can begin and end anywhere.    Now try it.

So, to solve this problem, we need to think outside the box, literally.

But to think outside of the next box, we need to understand that our struggle with this one came from the assumption that we made.

We need to think about that.  There was no box!  There was only the assumption of one…

Business leaders create boxes — strategy; business model; organizational structure; policy; work processes;  culture.  In fact, we might extend the metaphor and consider each of these a corrugated wall… 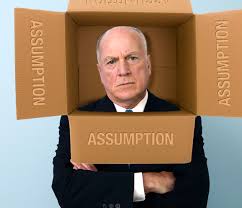 But those walls are corrugated assumptions!  Assumptions about customer needs and wants; about competitor strengths and weaknesses; about technologies; about human behavior…

Leaders go to significant lengths to create a box that holds the promise of profit.  And they are highly skilled at it; there is often impressive growth, significant profit, and engagement.

Until there isn’t.  Something changes.  Something always does.  Then they exasperatingly demand that we think outside the box!

These exhortations to think outside the box are clear indications that the box is constraining.  Assumptions need to be challenged.

It’s time to think ABOUT the box.

This, to some of you, might be reminiscent of the paper airplane post; asking people to think outside the box while they’re in it is fighting the physics.  It’s also akin to the matchbook; thinking outside the box might be able to solve a problem, but it won’t dissolve it…  There are even some connections with the monkeys that won’t go up the pole and Maslow’s Hammer …

Leaders really do want people to stay inside the box 95% of the time.  And, truth be known, we want the same thing, because that’s where we do our best work.

The crux of the matter is when staying inside the box is no longer working like it did … when leaders need their people to shift and think differently and get creative and innovate… they need to invest in building another box; a different box; a box that will allow people to once again be effective inside it, together.

And it’s not just up to leaders.  They don’t always feel our bumping up against all those different corrugated walls.

Which is why I would absolutely love to hear leaders exhort:  “People!  Let’s think ABOUT the box!”

3 thoughts on “Thinking ABOUT the Box”