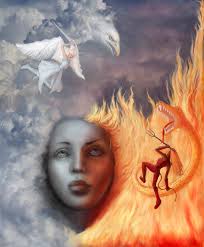 One day, an angel appeared to a woman who was contemplating the afterlife.  The angel offered her the opportunity to see what heaven and hell were like.

She decided to take a look at hell first, wanting to save the best for last.

She began sensing that she was in … a huge cave … a gigantic table came into view, with every imaginable delicacy spread out … an underground banquet hall? … it looked like the greatest smorgasbord of all time! … and then she realized she didn’t see anyone else there …

Around the banquet table were seated an endless array of people … they all, very curiously, had three foot long spoons and forks strapped to their arms … weird! … the utensils were so long that they could not put the food into their mouths … A strong feeling of despair came over her; she soon saw that, despite such an unbelievable spread of food, they were starving.

She was horrified.  It was a frustrated, wretched scene.  She closed her eyes.

It was dark once again.  Knowing that she was now going to see what heaven was like helped her recover from the trauma …

Once again, she started sensing she was in a huge cave … she saw the same table, with the same incredible feast prepared … everyone was seated around this banquet table … she noticed that they had those same weird three-foot long spoons and forks strapped to their arms … she flashed back to her hell experience, wondering if there’s been some mistake, but that thought was fleeting because she didn’t feel the same feeling … this scene was entirely different … everyone looked perfectly healthy, sublimely happy, and they were all having a marvelous time!

What made the difference?

[I’ve embellished the core story; yet, author unknown, but greatly appreciated!  If you or anyone you know has a proprietary interest in this story please authenticate and I will be happy to credit, or remove, as appropriate.]

It’s a corny story, to be sure.  But that take-your-breath-away closing point makes it work, don’t you think?

It is a pretty commonly held belief that it is a good thing to do good to others.  The “win-win” is real; others being helped are safer, healthier, or happier, and those helping experience a feeling of satisfaction and affirmation.

Some — maybe you? — would propose that serving each other is our purpose, given to us by a creator of some sort or another.

I will leave it to you to share what you will about what you believe.  I would just like to ponder a more earthly genesis of this notion.

My pondering angel (!) appeared to me and offered the chance to travel back in time, back when cave men roamed the earth.

I immediately found myself in darkness.

Through the darkness I started to see one cave man family, and, nearby, another.  I came to understand that these two families lived independently; they did not have anything to do with each other.

I then began to see that, this night, they were facing a common threat; one that was life-threatening.

I didn’t see what this threat was, but I saw what it did.

On this particular night, it caused one cave man family to help the other.

I felt the palpable sense of relief and gratitude that the family being helped felt.  It was the first time that they had ever been helped …

I felt the profound sense of satisfaction that the helping family felt.  It was the first time that they had ever helped …

And I realized that I had witnessed the very first time these cave people had the flash of insight that serving one another can provide safety, and security, and the opportunity to experience a whole new kind of life, liberty, and happiness.

In a flash, I was back; my pondering angel gone.

We can all serve each other.