Palm down and level, parallel with the ground, stick your flattened hand out the window of a fast-moving car.  Then, angle your hand slightly upward, so that the rush of air collides with your palm.  Your hand lifts upward, like a plane taking off …

Hand surfing, besides being fun, holds the secret to career advancement.

Hand surfing nicely simulates the physics of an airplane wing.

An airplane wing creates lift by producing a difference in air pressure above the wing as below, creating an updraft that pulls the aircraft up.

If you want to advance your 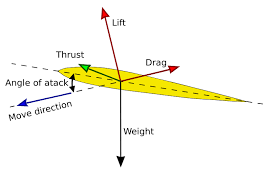 Of course I’m going to tell you how to do that!  🙂

We each have jobs that have an assigned set of responsibilities.  There is an expectation that we will perform our jobs — those responsibilities — at an acceptable level.  At least.

The vast majority of us do exactly that.

But, odds are, that won’t get you promoted.

We create lift when we, in addition to doing the job that we are in, also act and perform as if we are in the next job, the next level job.

You might think this insignificant.  I don’t.  It’s not.

It starts — in a small way, to be sure, but nonetheless it starts — to create the pressure imbalance.

I will tell you the precise time that I knew this was for real.

It was when it was related to me by another leader that the Executive Vice President expressed astonishment upon learning that I was not a Director.  I’m told he said, “He’s not a Director?  I thought all along he was…”

Upon hearing this, I must tell you, I had two dominant emotions.  One was satisfaction, understandably.  Affirmation of one’s work is a wonderful thing.

The other was injustice.

I was not getting any of the perks of that next level! — title, compensation, technology, autonomy, recognition!

I now believe that this is part and parcel of the phenomenon of creating lift.  This was my side of the pressure equation.  In other words, I had created the pressure imbalance — I was being perceived as performing at the next level while not actually at the next level — and I was experiencing that dissonance as injustice.

(There is turbulence in the updraft… can it be any other way?)

The injustice didn’t last.  The (meta)physics would not allow it to.

I was promoted a couple of months later.  To Director.  With the perks.

If you want to climb the ladder … forget climbing the ladder!

Instead, assume the position.