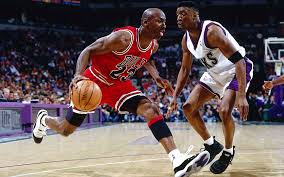 Michael Jordan, responding:  “There is in “win.”

It was Chicago Bulls assistant coach Tex Winters that yelled the “ain’t no ‘I’ in team” at Jordan from the Bulls bench.  Michael responded while trotting back to take his defensive position.

But do you find Jordan’s quip arrogant?

I didn’t, until very recently …

I do think it’s justified sometimes for one to take unilateral action, to get aggressive and unhesitatingly move forward, without involving teammates, without collaborating, without conferring, without getting “buy in” …

This has been on my mind recently as I experienced an exchange at work in a team meeting.  The team wanted to slow the project down a bit, designing into the process a few informational meetings with associates to ascertain what they thought we should do.

I knew what we should do.  I wanted to just do it.

Now, before you think me arrogant, let me say that it’s not often that I can compare myself to Michael Jordan.

Not often as in never.

As Michael’s teammates did, I wanted desperately for my project team to defer to me.

This is not inconsistent, nor contradictory, to teamwork.  Isn’t part of team play deferring to the hot hand?  Deferring to the expertise?  To the skill?

And let’s not forget: the goal, the objective, is not to play as a team.

But here’s the thing.

The Bulls lost that game.

It was April 17, 1987, Chicago Bulls vs. the Atlanta Hawks, final score 114-117.  Michael Jordan scored 23 consecutive points, setting an NBA record at the time.  He scored 61 total points in the game, part of a streak in which Jordan scored 50 or more points in three consecutive games.  And it was in this very game that Jordan eclipsed 3000 points that season, joining Wilt Chamberlain as the only other player to accomplish that feat.

So, given all that, it isn’t hard for me to imagine that Jordan was, in fact, out to score for himself that night.

Tex Winter, the coach responsible for refining the “triangle offense” into a formidable winning strategy, was right in reminding Jordan that there’s a team out there with him.

It was his way of telling Jordan to check his ego.  Play the team game.

In that project meeting a few weeks ago, I could have used a coach like Tex Winter.

2 thoughts on “Triumphant In Defeat”