The Chicago Cubs are baseball’s champions, having recently won the World Series, ending a 108 year drought.

As one of a multitude of long-suffering Cubs fans, I can’t tell you how good that is to write.  And re-read …

The Cubs accomplished their victory in true Cubs fashion. Up 6-4 in the eighth inning and four outs away from winning, everything changed with one swing of an opponent’s bat.

They were on the verge of once again—agonizingly, for every Cubs fan—seeing it slip away.

It perhaps would have slipped away, were it not for an act of leadership by a season-long struggling Cubs player.

That eighth inning ended in a 6-6 tie, as did the ninth; on to extra innings.

But then the skies opened.  Rain delay.

Some Cubs fans think the rain delay was actually a divine intervention orchestrated by their long-suffering-Cubs-fan-but-now-departed relatives … who’s to say it wasn’t?  But I digress.

As Cubs players were leaving the dugout to wait out the rain delay in the clubhouse, it’s likely that Heyward was feeling what his teammates were feeling — the gravity of another historic Cubs collapse.

Heyward acted. He called a players-only meeting. What did he say?

Whatever’s happened up to this point, forget about it. We’re still the best team. We need to pull together and chip away. We’re going to win this game. We’re good, we’re special; we got this; we can get the job done.

When play resumed, they did exactly that. The Cubs rallied and prevailed.

That team meeting was called by a player.  Not the manager who has the authority and power of his position; not a coach that has the players’ respect by virtue of their experience and expertise; and not a star player, who gets the attention of teammates because they are exceptionally skilled.

Jason Heyward was not the manager, not a coach, and not a superstar.  He was a positive and supportive teammate throughout the year, despite his own struggles. 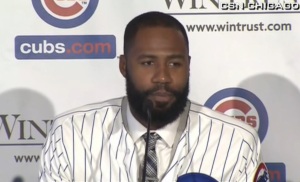 His message to his teammates was just what his team needed.  It was arguably the only thing they needed.

It was his play of the year.

And it wasn’t even on the field of play, it was in the clubhouse.

Isn’t there a leadership lesson here for all of us?

Our work isn’t really about us; it’s about our team.  We contribute what we can, when we can. Through good days and bad, we can be a strong team player. We can always support our colleagues, at different times, in different ways.

We do not have to be in a leadership position to lead. Our character and our behavior, day in and day out, positions us to lead. It enables us to influence, when our influence is needed.

Lastly, aren’t there times when leading at work is not so much about the work itself, but everything to do with how our teammates are feeling about the work?

For me, this is only one of many lessons in the Cubs epic win that can apply to us at work. Heck, there might even be 108 of them!

Odds are, you have some of your own.  There is a comments section here …

We all have multiple opportunities to apply these leadership lessons in our own lives, and in our work; with our family and friends, and with our colleagues.

And we don’t need to wait for a rain delay.

Or wait ’til next year.

5 thoughts on “A Leadership Lesson, 108 Years and 17 Minutes in the Making”